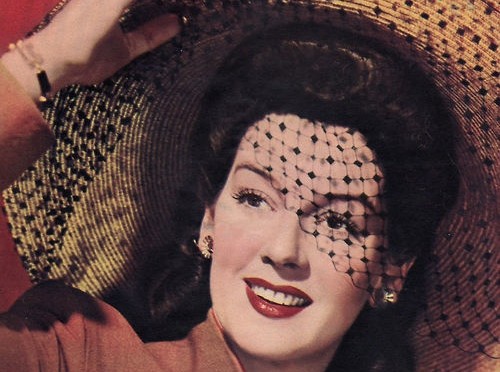 Rosalind Russell once said “Taking joy in life is a woman’s best cosmetic.” And no woman embodied that statement the way Rosalind herself did. Today is her birthday. Born on June 4, 1907, she would have been 108 years old today. Although she left this world and her legions of fans at the tender age of 69 in 1976, her legacy of films, charity work, and her influential presence. Ever since I saw that zany personality of hers in The Women, I have been hooked. At this point, no other actress can hold a candle to the amazing Rosalind Russell. And although she’s been gone a long time, I still like to think she knows how many fans, young and old, she still has, even in the year 2015. It brings me a lot of comfort to know her memory is not forgotten and I hope it never will be. Although she was beyond brilliant in her comedy roles (His Girl Friday, The Women, Auntie Mame to name a FEW), she was also a very accomplished dramatic actress. She is very underrated today and even in her heyday when it came to dramatic ability, but it must always be remembered that she was nominated for 4 Oscars and won 5 Golden Globes for her acting. She was always a very versatile actress, a woman full of life and wisdom—such an inspirational woman to me that I almost have no words to describe how much she inspires me. I never tire of her films, her personal quotes, reciting her characters’ lines, and her hilarious storytelling her autobiography Life is a Banquet. After all, “Life is a banquet” was really Roz’s philosophy of life. Eat up all those courses life has to give you and never regret one minute of it! Cheers, Rosalind <3