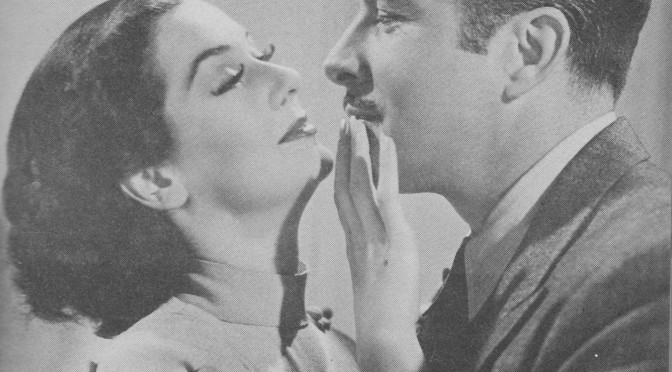 Although Rosalind Russell did not say much about her last film of 1936—her few words added up to “I was playing a meanie in Craig’s Wife”—it is a powerhouse performance that finally cemented her place as a serious actress in Hollywood. Rosalind fought hard so she wouldn’t have to do this role. She was sure everyone would hate her if she played “Craig’s wife,” but in the end, she did it and she was very close to being nominated for her acting skills. She may not have wanted to do it, but she gave it her all and I personally am glad we get to watch her in such a different role.

It shows how much range she was capable of and how well she could do it.

Craig’s Wife was the first film in which Rosalind received top billing. In the past, she was either relegated to the supporting cast or she was the female co-star behind the male star.

But in Craig’s Wife, lo and behold, she was the star. And she deserved it! She needed to put those snobbish English lady and “other woman” parts behind her, put her acting shoes on, and go show the world how many emotions she could instill in them. No, she wasn’t a superstar, but she was getting there; she was getting more and more well-known and—I’m sure of it—loving it.

Directed by the famed woman director Dorothy Arzner, Craig’s Wife is about a woman who has complete control over her husband, the people who work for her, and her house, but who, in reality, just wants to be alone.

Or does she? The film opens with an air of fear and stress as one of the maids, Mazie (Nydia Westman), moves one of the vases on the mantle just an inch. The older maid, Mrs. Harold (who is well-respected and more aware) immediately shouts out to her to leave it alone.

If she moves even one thing in this house or leaves one speck of dust, there will be a lot of trouble in store for both of them. She calls the room in which they are standing the “holiest of holies.” Later that night, Walter Craig (John Boles) is having dinner with his Aunt Ellen (Alma Kruger), who also lives at the house. He is going over to a friend’s house to play some poker, which he hasn’t done in a long time.

Ellen mentions that he hasn’t gone out to have fun by himself in a long time because of his controlling wife, Harriet (Rosalind Russell). Walter doesn’t think much about it. He just hopes that Harriet will come home soon. She is in Albany visiting her sick sister in the hospital.

When he leaves for his friend Fergus Passmore’s place, he exchanges a short conversation with their next door neighbor, Mrs. Frazier (played by Billie Burke). She often stands outside, watering her beloved roses, which she treats like her own children.

Walter visits his friend, a jealous man with a faithless wife, who tells him that his wife will be going out again and that nobody wants to play poker with him.

Walter is the only one who has come by. Fergus seems very distraught and angry, which worries Walter a bit. Meanwhile, in Albany, Rosalind Russell makes her first appearance as the icy Harriet Craig. She sits in her sister’s hospital room, contemplating what is going on. Her sister’s daughter, Ethel, is by her mother’s bedside, sobbing over her sickness. Harriet immediately fetches a nurse and tells her she will leave right away with her niece because she thinks Ethel will set her back.

It is on the train home that the viewer gets a first glimpse at the type of woman Harriet is. Ethel informs her aunt of her intention to marry a man who teaches at the college she attends, and that she would never marry someone unless she was in love.

Harriet doesn’t seem to agree with her views, saying that “love is a liability in marriage.” Ethel discovers that her aunt has never been in love with her husband, Walter, and that the main reason why she married him was to have a place in society and to have a lovely house, which we find out later is her “true love.”

“I married to be independent… independent of everybody,” says Harriet, something that shocks Ethel. Harriet then sends a telegram to Ethel’s boyfriend in Ethel’s name, which immediately rouses suspicions in him.

The next morning, Fergus and his wife have been found dead in their home and Mrs. Harold, one of the Craigs’ maids (Jane Darwell) suspects Mr. Passmore right away. Harriet arrives home ahead of schedule and exhibits some very obsessive compulsive behavior the minute she walks in the door. The first thing she notices is that the door was ajar when she came in and she will have none of that. While she tells Mazie to get Ethel’s bag up to her room, she looks around the room for even the tiniest thing out of place.

She touches every surface to make sure no dust is visible and examines every object in the room to see that they have not been moved from their original position. It is clear—although it is subtle beneath her icy exterior—that she is unhappy when she finds some mysterious flowers in the room and a stray piece of paper on a table.

Her anger rises when she finds out each object is directly connected to something she didn’t control. The flowers came from Mrs. Frazier, who is visiting with Aunt Ellen upstairs and the paper has a phone number on it—a number where Walter could be reached since he went out last night. Despising the fact that he went out without her permission, she hurries upstairs and calls the number, trying to find out who it belongs to.

Because the Passmores were found dead that morning, any calls to the number are being monitored, immediately putting the Craigs into some hot water. Harriet simply doesn’t trust anyone, even her own husband, who clearly adores her. She doesn’t trust others to be in her house, especially her neighbor, Mrs. Frazier.

When Walter comes home and finds out his wife is back, he runs up the stairs, excited as a little boy, and greets her with glee. It is awful to imagine the fake love Harriet has for her husband, a man whose love is genuine. One of the first things she tells him when he comes into her room is to not sit on the bed because he will muss it.

He doesn’t see why it matters, but he listens to her anyway (as he always does). He kisses her, so happy to see her, and she tells him that Ethel is here and that she doesn’t want Mrs. Frazier in the house. She doesn’t want her near the house or near him and Walter thinks it’s ridiculous. And it is indeed ridiculous to think a woman 23 years older (the actress anyway) than Harriet could steal her husband away.

Later that evening, Ellen tells Harriet that “people who live to themselves are generally left to themselves,” a statement that would resonate with Harriet later on. She tries to explain to Walter what kind of woman Harriet really is, but Harriet immediately and nervously laughs very loud in reaction.

She doesn’t want to hear it because she knows it’s true. Her husband has been fooled by Harriet’s motives in the two years they’ve been married and she wants it to stay that way. But once Harriet has left the room, Ellen tells Walter the truth.

She explains that to Harriet, her life is all about her reputation and her lovely home, not the people in it. If she thought she could have this house without Walter, she would do so. After the enlightening conversation with his aunt, Walter takes a ceramic object off the mantle and smashes it on the floor in anger.

He doesn’t care anymore that Harriet doesn’t want a thing out of place, for the room to be spic and span. He has been fooled for far too long and he will smoke in the house if he wants to.

The next day, Ethel finds out that Harriet had answered the phone when her boyfriend had called and told him she was not to be disturbed.

She is angry about what she did because she wanted to talk to him. While she is explaining her reasons for leaving, Harriet is suddenly distracted by a noise outside. She gets down on her hands and knees in despair and rage, inspecting the damage the mover has caused.

He was carrying a trunk across the hall and accidentally dropped it, causing it to slide across the floor, scratching it. To scratch Harriet’s beautiful floor is a terrible crime. She screams at him and doesn’t even notice that Ethel has already gone.

It is at this point that everyone starts leaving her house, which is something she thought she wanted anyway. After Ethel, Aunt Ellen and Mrs. Harold hand Harriet their keys to the house. They leave together, leaving Harriet with Walter. However, the same day, after Harriet has discovered the broken pieces and cigarette butts all over her “holy” room, Walter also gives her his keys, saying she can keep the house.

It’s all she wanted anyway and “you neither loved me nor honored me.” She is left alone in the house and she looks around, trying to take in what just happened.

She receives a telegram, informing her that her sister has died. Without any family or anyone in the house to keep her company, she is finally completely alone. She breaks down, crying about her plight, and realizes this isn’t what she wanted after all. When Mrs. Frazier comes by and hears of the news, offering condolences, Harriet decides she wants company after all. But by the time she calls out to her, Mrs. Frazier has already gone. Harriet looks around the big, empty house discerningly with glistening, beautiful tears in her eyes.

She now knows what it’s like to be “independent of everybody” and it’s too late to go back.

This role was a far cry from anything Roz did before or after, but I have to say, it’s fascinating to see her transformed into an ice queen with a domineering personality. I also have to admit her character frightened me at first. It was a bit of a shock to me, but what a performance!