I have a long, busy day ahead of me, but thought I’d leave you all with an amusing photo:

An interesting story behind the creation of the song One Hundred Easy Ways from Roz’s Broadway musical Wonderful Town! Written by Roz herself:

“Right now I want to tell you about how one of the Bernstein-Comden-Green songs in the show, One Hundred Easy Ways to Lose a Man, came to be written.

When Wonderful Town was in its tryout period on the road, before the Broadway opening, I suggested the trio write me a number about the fact that I couldn’t get a man. ‘It will help the audience understand the character I am trying to interpret,’ I said.

They looked puzzled. ‘You mean a blues song?’

‘Not a blues song,’ I explained. ‘That’s when you’ve had your man and he’s done left you. Maybe it will help if I tell you something about me. When I was a girl, I’d go to a football game with a boy and say, ‘The next play is going to be an end run,’ and he’d say, ‘You’re crazy. It’ll be a forward pass.’ Then they’d run an end, and I’d never see him again. Or I’d go out in a jalopy with a boy, and it would stall. He’d get out and open the hood. ‘I think it’s the carburetor,’ he’d say. ‘It’s not! It’s dirt on the points,’ I’d argue. ‘I’ll fix it.’ I never saw him again! On the porch or in the parlor a boy would put his arm around me and say, ‘Roz, you certainly are attractive.’ I’d cross my eyes and say, ‘Are you kidding?’ I never saw him again either. That kind of song.’

A few days later they were back with One Hundred Easy Ways to Lose a Man. I knew it was show-stopper after hearing the first few lines.

I really understood the role of the girl in the song that Bernstein, Comden and Green wrote. I have suffered more at the hands of men than any five girls I know, but while suffering I’ve learned a few facts about the beast. I made my first discoveries in this area of life when I was a scrawny, freckle-faced six-year-old in my home town of Waterbury, Connecticut. I found that males are not as hot stuff and as omnipotent as they think they are.”

Here is the song from the show and you’ll see how funny it is (I posted it on YouTube a while back):

An absolutely wonderful person uploaded “The Women,” in which Rosalind stole every scene she was in.

I hope enough people find this and enjoy!!!!

Thanks to HM for telling me.

Welcome, everyone, to my blog!

First of all, I’d like to say that I am a 21-year-old college student from southern California and of course, Rosalind Russell is my favorite actress!

Should I advertise? Well, I’m going to anyway. My YouTube channel is Desiree Loves the Classics and it is mostly Roz videos, films, etc. with a little extra things here and there. If you are a fan of Roz’s and you want to request anything, just let me know and I will tell you if I have it. 🙂

This is the first time I’ve ever kept a blog and I will try very hard to update it several times a week. If you find this blog, please link!

I’ll leave you today with a picture from my favorite movie, Auntie Mame: 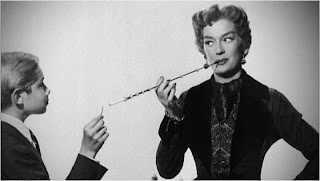