Hard to believe it, but I’m back—I thought I would devote this week to more writing. After spending a week in Los Angeles with my good friends Renata and Janine and then after Christmas, 10 more days with them and with another good friend, Irina (met her for the first time!)in Mexico, it is hard to say how I feel about my life. It certainly does seem a great deal more boring than I had realized before taking on this wonderful adventure. I am having trouble dealing with the emotions since coming back—sometimes I am sad, sometimes empty, sometimes angry at my “nothing” life—and I am trying to get over that. In fact, writing this post helps me a great deal, and so does singing my favorite songs! I will get over this eventually. I hope you are not too bored with the petty details of my life, but writing it out helps and these friends I got to know like sisters, I met them because of classic movies! Now, none of them share their favorite actress with me (I think we all know who my favorite actress is). In fact, we all met because of my second favorite actress, Irene Dunne, and it’s interesting how this actress has brought me together with several friends, but especially with these friends. In fact, I have never felt such a close kinship with any friends before, and that’s what makes it so devastating for me. One is from Mexico, one is from Germany, and one is from Israel. How do we overcome an obstacle like that? Of course, the only way is to visit each other whenever possible, but we are not made out of money. If there is one thing we’ll always have, it’s classic movies!
When I was in Los Angeles, I visited Roz’s star, her grave, her footprints, and her house. In fact, many interesting things happened in these instances. I love seeing her star because I know how much she deserves it and all I can say is, Roz is truly the best! There was no one like her. I love seeing her handprints and footprints at Grauman’s Chinese Theater, too, because it really amuses me how much longer her thumb was than mine when I attempt to fit my hands into her handprints. And something that really reflects her sense of humor and sense of fun is what she wrote in the top of her cement square: “Auntie Mame was here.” It makes me sad that the “was” is starting to fade, but let’s face it. This was over 50 years ago when she made history with her footprints, handprints, and signature in cement. 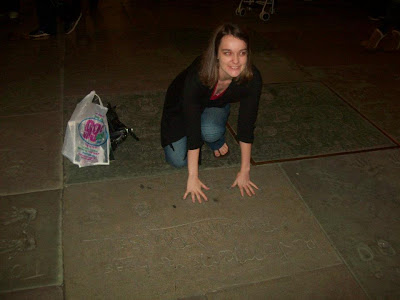 Me putting my hands in Roz’s handprints at Grauman’s Chinese Theater
When we visited her house, believe it or not, friends, the gates opened while we were standing there! Yes, we finally got to see Roz’s entire house (and yes, it’s the same one she lived in! I recognize her blue shutters). There is a very high hedge in front of the house, so it was very hard to see much of her house, but when a man came up in a van, told the person inside the house that he was there, the doors “magically” opened for him. I say “magically” because my friend Renata claims that she had the “power” to open those gates for me—ha, right! It was unbelievable. I just happened to be standing there when the gates opened, and I got to sort of stand where the gates would be and marvel at the house Roz once lived in… before the gates closed again, that is! 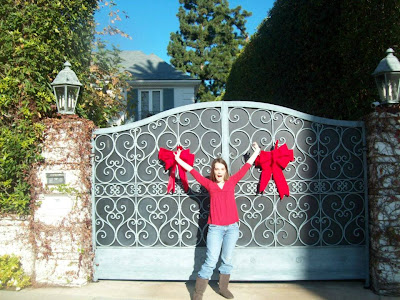 Me acting silly before the gates opened… 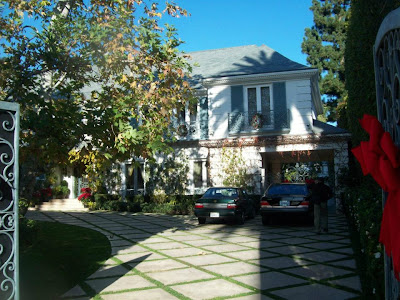 Roz’s house!
I consider myself so lucky to have friends like this that I can share classic movie things with, and do “classic movie” related things with without them thinking I’m totally bonkers. I am also lucky to live in Southern California. I am only 2 hours away from Hollywood, Beverly Hills, Culver City—all the places where these things are located for Roz fans to see.
Speaking of which, I had to be in awe at Roz’s grave again. I had seen it before, but why is it so massive? A huge statue of a cross and it’s on some kind of pedestal with steps in front of which Roz and her husband Freddie are buried. There was a lone purple flower growing, also, in the vine that grows up the statue. As well, someone had left two candles on her grave and I have since wondered who left them. It’s good to know Roz has other fans—I know she has, but I never see any proof of it when I am in L.A. I feel like I’m the only one paying attention to her star or footprints, so still, the proof exists =) 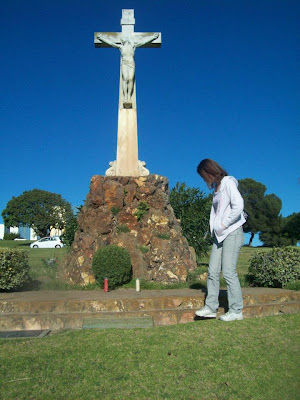 You can see the candles there. 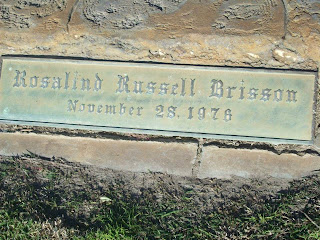 R.I.P.
Sorry if I wrote much too much, guys, but I really felt like writing today. I just wrote this out now without looking over it, so please inform me if there are any errors! Thank you! I’ll get back to you soon later this week. I have more to tell 😉 Have a great week! 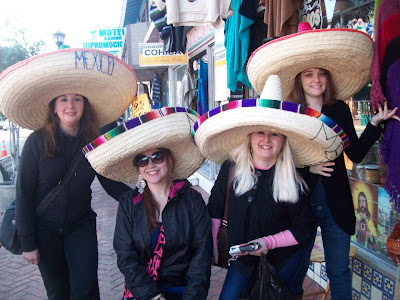 I absolutely adore these people!! <3

5 thoughts on “My Life Is Changed Now… and Revisiting Roz Places!”